Two weeks ago, I posted a blog about a recent False Claims Act (FCA) settlement at the intersection of healthcare and procurement fraud. In early March, I wrote about FCA and compliance issues involving electronic health records systems (EHRs). Now the Department of Health and Human Services Office of Inspector General (HHS-OIG) is expanding its investigation and enforcement efforts in both of these areas. 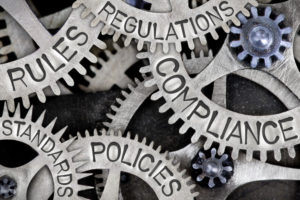 On April 24, 2020, HHS-OIG published a proposed rule that would expand its civil monetary penalty (CMP) authority. The proposed rule, (1) modifies 42 CFR §§ 1003 and 1005 to expand CMP authority to fraud and misconduct involving HHS “grants, contracts, and other agreements” pursuant to the 21st Century Cures Act (Cures Act); (2) provides HHS-OIG the authority to investigate and impose CMP penalties for information blocking pursuant to § 3022 of the Public Health Services Act (PHSA); and (3) increases the amounts of certain CMPs pursuant to the Bipartisan Budget Act of 2018 (BBA).

The proposed rule, (1) modifies 42 CFR §§ 1003 and 1005 to expand CMP authority to fraud and misconduct involving HHS ‘grants, contracts, and other agreements’ . . . (2) provides HHS-OIG the authority to investigate and impose CMP penalties for information blocking . . . and (3) increases the amounts of certain CMPs . . . .

The first two changes in particular are significant. While HHS contractors and grant recipients are already subject to FCA liability in many cases, the CMP expansion would provide additional avenues for investigation and enforcement by “the largest grant-making agency” in the country. Government investigations that might be delayed or declined in an overburdened U.S. Attorney’s Office, or may not meet its monetary threshold, may see renewed focus from HHS-OIG.

Moreover, as HHS-OIG acknowledges in the proposed rule, “information blocking is newly regulated conduct” and “some individuals and entities subject to information blocking CMPs may not be familiar, or have limited experience, with OIG’s enforcement authorities . . . .” Still, HHS-OIG considers information blocking to have significant negative effects on “patient safety, care coordination in the healthcare system, and the ability of patients and providers to have information to make informed, appropriate decisions about important healthcare decisions.” HHS-OIG will not initiate information-blocking enforcement efforts until 60 days after the final rule issues, but EHR developers and other healthcare IT companies should begin reviewing their systems now to ensure compliance. HHS-OIG may want to set some precedents and demonstrate that it is serious about information blocking soon after that 60 days expires.

Subscribe to the SRVH blog for further updates and contact our Government Compliance & Investigations or Healthcare groups with any questions or concerns.

Photo By EtiAmmos from Shutterstock How SRVH is navigating the coronavirus from homeCOVID-19, Blog, Firm News