The Corporate Transparency Act: Why All Small Business Owners, Investors, and Their Lawyers May Be Required to Share Their Personal Information With The Federal Government

By Will Pugh
Posted June 21, 2022
In Blog, Corporate
The Corporate Transparency Act: Why All Small Business Owners, Investors, and Their Lawyers May Be Required to Share Their Personal Information With The Federal Government2022-06-212022-06-21/wp-content/uploads/2018/03/srvh_color.pngSRVH Lawhttps://www.srvhlaw.com/wp-content/uploads/2022/06/blog_pugh_corporate-transparency-scaled.jpeg200px200px
0
0

Countless companies across the country may soon need to tell the federal government who established, owns, controls, or influences their business. The Corporate Transparency Act (CTA), passed in 2021 to stop illegal money laundering, will impose new and extensive reporting requirements on about 90 percent of American businesses. For companies subject to the CTA, compliance is non-negotiable, and failure to make the required disclosures can result in significant fines and even jail time.

Here is what your business needs to know about the Corporate Transparency Act:

The Why and When of the CTA

When Congress passed the CTA in January 2021, its stated intent was:

To accomplish these objectives, the CTA establishes self-reporting obligations for non-exempt companies regarding the individuals who run or have influence and interests in them and in the company itself. The federal government will add this information to a database managed by the Financial Crimes Enforcement Network (FinCEN) division of the U.S. Treasury Department. The database will be accessible to federal law enforcement officers and agencies. With court approval, other national intelligence and enforcement agencies can obtain access, as can private financial institutions and their regulators with the consent of the reporting company. So, it is worth noting that the FinCEN database is not intended to be publicly accessible. 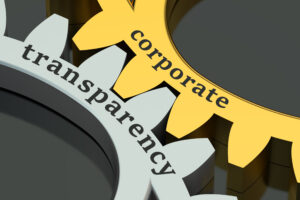 FinCEN is also charged with enforcing the law. It issued proposed rules in December 2021 about which entities need to file reports, what must be disclosed, and the consequences of non-compliance. As the final rules are still under consideration, it is unclear when the CTA’s reporting and other obligations will kick in, but in theory, that could occur later this year. At a minimum, companies should take this time to familiarize themselves with the law and prepare to make the required disclosures when the time comes.

Is Your Business Subject to the CTA’s Disclosure and Reporting Requirements?

Subject to several exceptions, most entities created by filing documents with a secretary of state are considered “Reporting Companies.” This would include limited liability companies, limited partnerships, statutory trusts, and corporations—no matter how small. Indeed, the proposed rules specifically target small companies, as “Large Operating Companies” are exempted from the CTA as discussed below.

Most exceptions are for businesses that already have beneficial ownership reporting obligations under other laws. If your business is one of the following, it is not subject to the CTA:

During the notice and comment period, one issue that was flagged by commenters is that the proposed regulations are not clear regarding whether or not non-statutory trusts or general partnerships are subject to the CTA’s reporting requirements. Hopefully, the final rules will bring clarity.

What Reporting Companies Need to Disclose

Reporting Companies subject to the CTA will need to provide FinCEN with the following information:

Beyond these basic disclosures, covered entities must also provide information regarding “Applicants” and “Beneficial Owners.” Applicants are the individuals who filed the application to form a corporation, limited liability company, or other similar entity, which could include outside attorneys or accounting firms.

A Beneficial Owner is an individual “who, directly or indirectly,” either:

While the CTA does not define “substantial control,” FinCEN’s proposed rules include three indicators that focus on identifying “the individuals who stand behind the reporting company and direct its actions.” These are:

Covered entities must provide all the following information regarding Applicants and Beneficial Owners:

Consequences of Non-Compliance With the CTA

The penalties for non-compliance or fraud outlined in the CTA are fairly harsh. Any person or entity that “willfully provides, or attempts to provide, false or fraudulent information or willfully fails to report when required” could face civil fines of $500 per day, criminal fines of up to $250,000, and up to five years in prison.

The timing for the disclosures listed above will be measured from the final, effective date of the CTA and FinCEN’s final rules once they are published.  Once that effective date is determined:

As noted, the CTA’s reporting requirements are not yet in effect. But when they are, your business must comply if it is covered by the law. If you have questions about the Corporate Transparency Act and its impact on your business, please contact one of the corporate attorneys at Sherrard Roe Voigt & Harbison today.