In my last post, I mentioned that it is becoming standard for unsecured creditors in a Chapter 11 case to go after the debtor’s private equity backers:

One issue that I am seeing in my practice already is that it is becoming standard operating procedure in large private-equity backed bankruptcy cases for the unsecured creditors to sue the private equity backers, and/or their principals or management team, for allegedly improperly causing the insolvency. 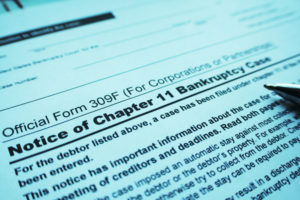 In the Commercial Observer story, the article cites research showing that all of the large grocery chains filing for bankruptcy in recent years were owned by private equity:

From 2015 to 2018, seven large grocery chains owned by private equity firms filed for bankruptcy, including A&P, Haggen Food & Pharmacy, Southeastern Grocers and Fairway, the latter which filed its first Chapter 11 in 2016, according to an article in the magazine The American Prospect that Appelbaum wrote with Rosemary Blatt. During that same time period, Applebaum and Blatt could not find a single publicly traded grocery chain that did the same.

In exploring the reasons why, the article suggests that private equity owners in the grocery space have been willing to treat their portfolio companies as a real estate play:

Private equity firms were able to put a lot of debt on them, sell off the real estate at a higher value to pay off that debt and then pocket the rest, all while taking constant dividends from the money the stores brought in.

The New York Times analysis lays out some arguments about whether this is good or bad for the overall economy. The thrust of the article is about the “destruction” of the Payless shoe brand:

Payless is now a carcass of a company, with no stores in the United States and a relative handful of employees in a headquarters that once held 800.

The interesting thing to pay attention to here is that the mainstream media is exploring this debate about whether private equity investors are improperly causing business failures and bankruptcy filings.

But it also acknowledges the school of thought that private equity and, in these situations, Chapter 11 bankruptcies are a healthy part of evolving the economy because they facilitate moving capital to new, better industries and companies over time:

There’s a certain model of capitalism under which this failure, painful as it was for those who lost their jobs, is a win over all. Strong, well-managed companies rise up and replace failures, producing a more competitive economy that benefits everyone over the long run.

The interesting thing to pay attention to here is that the mainstream media is exploring this debate about whether private equity investors are improperly causing business failures and bankruptcy filings.